Home » Uncategorized » Gateway to the Gods

Gateway to the Gods 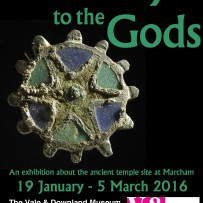 Over 10 years of archaeological excavations on Trendles Field, Marcham, unearthered evidence for ritual and religious practices beginning in the Iron Age. They continued into the Roman period when a temple and semi-amphitheater were constructed. The site produced thousands of artefacts, many of them gifts to the gods.

This exhibition presents some of the findings and artefacts from this fascinating community archaeology project.

Welcome to our blog!

Welcome to our updates on all events, current exhibitions and other news from our museum.

Calendar of our posts

Recently on our blog