Here you can discover the fascinating story of the Vale of White Horse and the adjoining chalk hills - which are known somewhat confusingly as the Downs! Amazingly, the Vale was once the bottom of a tropical sea but is now home to many hi-tech industries, so we feature everything from fossils to Formula 1. From the Stone Age to the Atomic Age, the exhibits make connections between the distant past and the present 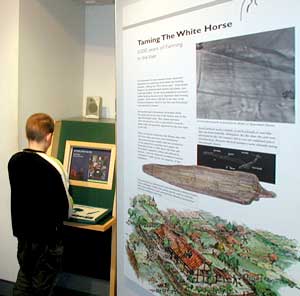 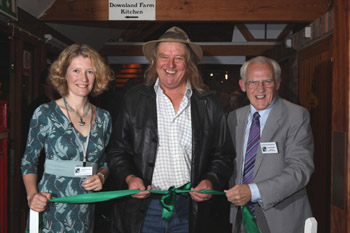 This is an exhibition which celebrates the life and times of the famous King of Wessex and his association with the town of his birth. The exhibition was originally displayed in the Winchester Discovery Centre and has now been reassembled with new displays and new objects. It tells the story of Alfred’s epic struggle with Viking invaders, the transformation of his army into an effective fighting force and his legacy of culture, learning and craftsmanship. With a grant from Renaissance South East, the museum’s curator, Ruth Howard, has created a display especially for the Wantage area.
Photo www.innesmarlow.co.uk 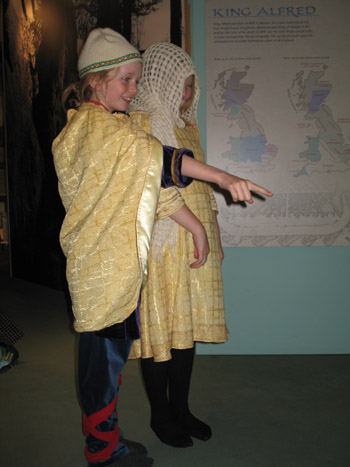 It brings together archaeological finds such as Anglo-Saxon jewellery, weapons, ceramics and objects from everyday life from the Vale of the White Horse and beyond and also gives an insight into local people’s lives during the sixth to ninth century. The exhibition was opened by Phil Harding of TV’s Time Team. Phil Harding said of the exhibition: “It’s been a good year for Saxons, with lots of good finds. The exhibition is a great thing to put together and I expect people to flock through the doors for this.” The exhibition is very family orientated and features hands-on games for all ages. Children can find out what people wore from original artefacts and then try dressing like an Anglo–Saxon from a selection of dressing up costumes.

Come and see this exciting exhibit and enjoy coffee, tea and/or lunch in our excellent cafeteria.

Children, and many adults, will be especially attracted to the interactive aspect of the Railway through the Vale exhibit. Press one of the buttons on the exhibit and a train will travel from one end to the other and then back again – all with realistic acceleration and top speed. There are two trains here; one is a 1930s diesel railcar in GWR brown & cream - nicknamed the flying banana, and the other, a 2-car diesel unit – a 1987 a type 155 Sprinter.

To get technical, the trains are both from the current Hornby catalogue, and the track is by Peco - OO gauge with code 100 rail. Most of the landscape, including the many trees, is constructed from materials imported by Bachmann Europe PLC and readily available in many model shops.

The idea for the exhibit originated many years ago but, the significant work started in October 2007 and was completed for the Wantage Dickensian Evening in December 2008. The work was managed by Michael Watts and ably carried out by Museum volunteers; Howard Raimbach, Raymond Sherwood, Dennis Simpkin, together with the additional support of French trainee-engineer Benoît Chaffanon, during the 2008 summer vacation.

This new Railway through the Vale exhibit can be seen and operated during the usual Museum opening hours: Monday - Saturday (not Bank Holidays) 10.00 am to 4.00 pm.