Welcome to the Vale & Downland Museum

Arty August Activities in the Museum!

Check out the ‘What’s On’ Page!

Fab Finale for  Summer Festival Events at the Museum!

After twenty events in three weeks, the museum’s contribution to the town’s summer festival ended with a  lively Saturday morning of song and music from Pandemonium. The coffee shop was packed as this popular Wantage folk group played and promoted their new cd, ‘Hats off to Wantage’ -available now in the museum shop! (For more information about the cd, visit www.pandemoniumwantage.org.uk.) The band also did a great bit of spontaneous fund-raising ,  encouraging the audience to support the museum’s building fund. £60 was raised and a good time was had by all. Thank you , Pandemonium! 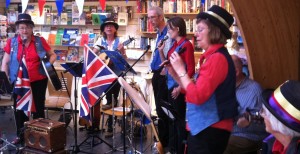 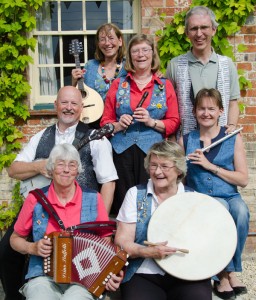 Thank you also to ‘The Madhatters’ and ‘ The Flower of the Quern’ for livening up the first two festival Saturdays with some great  musical performances. We hope to welcome you all back soon. If there are any more musicians out there who would like to perform in the museum coffee shop, please get in touch. We would love to hear from you.

The patio is now  open and blooming… 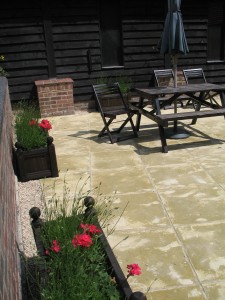 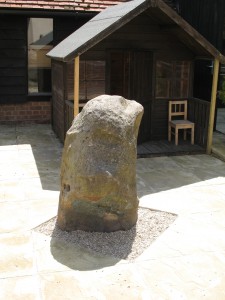 If you haven’t seen the  patio recently, make sure you have a look next time you visit the museum.

Thanks to the  local W I,  both the lower and upper patios  now have planters filled with flowers and shrubs.  The tables and shades are out, visitors can enjoy lunch  outside and children can  play in the Wendy House.

We hope to see you soon! 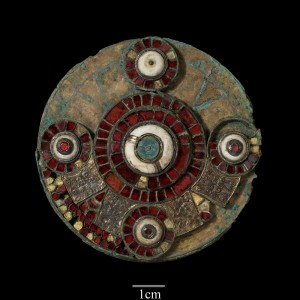 rare and spectacular Anglo-Saxon brooch, found at West Hanney in 2009  is now on show at the museum until the 31stAugust.  The brooch, which is on loan from the Oxfordshire County Council’s Museum Service, has undergone several months of conservation and investigation.

The exciting discovery was made during a metal detecting rally in West Hanney in 2009.  A controlled excavation of the find-spot by Anni Byard, Finds Liaison Officer for the Portable Antiquities Scheme, revealed the skeleton of a female aged about 25, together with two small pots. These finds are of national as well as local importance.

The brooch is a rare type dating from the 7th century, decorated with garnet and gold inlays. Its style and fine craftsmanship indicates that the individual buried at West Hanney was a person of high social status. This is the twentieth find of its type recorded in England and the most westerly example as most other find-spots are distributed in Kent, East Anglia, Essex and Bedfordshire. Although we do not know where the brooch was made, or whether its owner was a member of the Gewisse (the tribal name of the local Saxons) further investigation of the finds will increase our understanding of the burial.

Ruth Howard, Curator, said, “We are thrilled to be the first museum in Oxfordshire to exhibit the brooch and are very much looking forward to seeing the results of the conservation.”

Objects Conservator Sarah Morton said: “This was a significant find both locally and nationally and people now have the opportunity to see this beautiful item first-hand. It appears to have quite an interesting history itself, especially as we think that it belonged to the person that was buried nearby to where it was found.”  Sarah will be giving a talk about the brooch and it’s conservation at the Vale and Downland Museum on Monday 16th July,  7.30pm  – 9pm. Tickets, priced at £4, are now available from the museum’s reception desk.

The brooch was purchased with the assistance of the V&A Purchase Grant Fund, the Headley Trust, and the Friends of the Oxfordshire Museum.  The Friends of the Vale and Downland Museum contributed to a fundraising project to have the brooch conserved and to enable a full analysis of the skeleton and the other finds

In order to pay for the recent building project, the museum still needs to  fund-raise. We thank everyone who has supported us so far. All donations are very welcome! Please consider supporting one of  our fundraising initiatives eg ‘Buy a Brick’ campaign.  Ask at the museum reception desk for details. 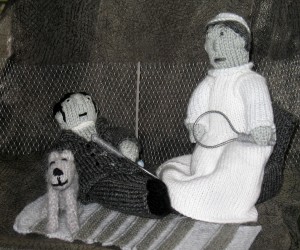 ‘Good Sports’, a celebration of the joy of amateur sports, has now opened. Featuring the work of local artists  and community groups together with  photographs from the museum’s archive, the exhibition features everything from knitted footballers to cheese rolling. More information can be found in the galleries section of the website.

The Vale and Downland Museum is located in the busy market town of Wantage in Oxfordshire, UK. The museum has been nationally acclaimed as an outstanding example of community partnership. The range of services is broad, ranging from galleries interpreting the cultural heritage of the Vale of White Horse region, to a cafe with a delightful terrace and garden.

Situated in Oxfordshire’s Vale of White Horse, and historically part of the Royal County of Berkshire, the Vale & Downland is one of the most popular museums in the area. Described by the Museums and Galleries Commission as a ‘model community museum’, it attracts about 53,000 visits a year. It attracts both local people and tourists, about a quarter of visitors coming from beyond Oxfordshire and Berkshire. The museum has grown steadily from modest origins in 1958 and celebrated its Golden Jubilee in 2008. 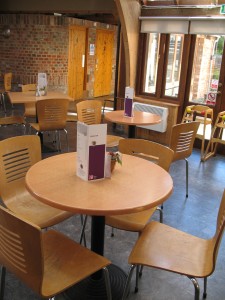 The museum entrance, Squires Room, Downland Kitchen and offices are in a converted 17th century cloth-merchant’s house. It’s a Grade 2 listed building and a fine example of local vernacular architecture. Behind it are the visitor facilities, in a 20th century extension with wooden crucks spanning two floors. The main gallery is also partly 20th century but includes the 18th century Hunt’s Barn, kindly donated by Thomas More Eyston and moved from the nearby village of East Hendred. The stores, workshop, kitchen and library are in an adjoining building, known as Legge’s Cottage.

The site was originally part of the medieval manor of Priorshold. The plot of land and the house were leased to Wantage tradesmen after the dissolution of the priory in 1538. Archives of the Dean and Chapter of Windsor show that the site was let to Alexander Doe in 1662 and then to William Hazell, a wheelwright, in 1683. Lawrence Hazell, a clothmaker, was responsible for the major rebuilding of the house in 1780, commemorated by the date stone bearing his initials over the central first storey window. In the mid-19th century the house became the doctor’s surgery and remained so until 1974 – hence its present name, the Old Surgery.

In the mid 1970s, the newly-formed Vale of White Horse District Council bought the site and leased it to the museum trust to provide a new home for the museum. The Vale & Downland Museum Centre formally opened in 1983 and major improvements to the main gallery were completed in 1999.

Entry to the Museum is free but we do ask that visitors make a contribution in the box provided.  The Museum relies on the generosity of its visitors and Friends to ensure it remains open.